It is the 10th year for a Natural Agriculture farm in Yatesbury, in the UK. The farm manager, Mr. Imahashi said, “Through its long history, 10 days of rain brought us to our turning point.” Although 10 straight days of rain was nothing out of the ordinary, that year, the rain broke through the greenhouse, which ended up exposing all 600 of their tomato plants to constant rain. The tomatoes quickly became sick with tomato blight. Tomato blights are so fierce that people believe that it is impossible for the plants to recover. It starts from the leaves, and eventually destroys the entire crop that shares the same soil. Any farmer, even organic ones says, “Once you get the tomato blight, that’s it. You will have to burn down all the tomatoes, and even remove the soil, since the blight remains in the ground.”

Since the principle of Shumei Natural Agriculture is an overriding respect and concern for nature, Mr. Imahashi believed in the natural strength of the tomatoes. His solution was quite simple. He talked to all 600 plants and even the soil, every single day. However, after a week of trying, it only got worse. Potatoes were planted right next to the tomatoes , which meant that he had to act quickly before the blight spread to the potatoes. It was time to give up.

Mr. Imahashi started pulling out, one tomato plant at a time. After reaching 50, he just could not do it anymore. He felt that there was more that he could do to believe in the tomatoes. The tomatoes were trying to fight the disease, so why couldn’t he? He stopped pulling out the tomato plants and went back to talking to them every day. Every day, rain or shine, he kept on talking to the plants and the soil. It only took another week until he saw a fresh leaf not affected by the tomato blight. After that he only lost about 10 more tomato plants, but over 500 survived and they produced beautiful tomatoes from that moment on.

This story of tomato plants overcoming a blight is extremely surprising to other organic farmers. Up until then, it was “impossible. ” Even long-time organic farmers have never seen or heard of a case where tomatoes beat the blight.

After his story became known to other organic farmers he was often asked, “What should we do when we get this type of disease on our crops?” Using the Shumei Natural Agriculture method, we have noticed that crop diseases arise when there are impurities in the soil and the seed. Diseases are a process of purification. The Shumei Natural Agriculture method focuses on keeping the soil, pure, which keeps diseases away. Mr. Imahashi also believes that because the soil was pure, his plant were able to survive.

Yatesbury grows, about 40 types of vegetables, and the tomatoes are still shining bright.

Mr. Imahashi said, “I do not doubt that the Shumei Natural Agriculture method is one of the best ways of sustainable farming. It was difficult for me to truly understand this method, even with great crops for the first 5 years. On this 10th year, I finally feel that I have gained understanding and trust in this method because I was able to prove that through healthy soil amazing crops can succed. We even have other organic farmers who are joining us by using this method.”

Furthermore, Shumei Natural Agriculture has been expanding to Ireland, Spain, Greece, Italy, and other countries.

In 2005, Shumei and the UK Soil Association formed a partnership. Since then, the Shumei Yatesbury farm has been participating in activities to help make society a better place. The Shumei Yatesbury farm has also maintained a good relationship with the Vegan Organic Network, where Mr. Imahashi taught Shumei Natural Agriculture to its members, some of whom have actually started to farm using this method.

In 2010, the Shumei Yatesbury farm only had 20 visitors, but this year it had about 300, and communication with the visitors has continued. In 2019, Mr. Imahashi even had his farm introduced on the BBC’s radio program “On Your Farm.” Since then, the farm has received many responses.

Mr. Imahashi said, “I hope that through the Shumei Natural Agriculture method, we can keep working to make farmers and consumers happy and healthy. ” 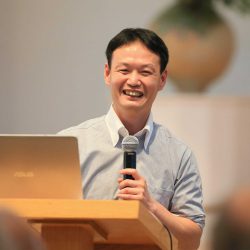